A combined strategy to reduce Salmonella in pigs

For a long time, antibiotics have been strategy number one to deal with Salmonella. This, however, is no longer desired in many countries, due to antibiotic resistance. Alternatives are needed – combining various natural ingredients could be a great step.
Salmonella Typhimurium is one of the big challenges in the swine industry, for instance because it is the cause of pork-related human salmonellosis cases. An intervention at primary production level is therefore logical when aiming to reduce the number of Salmonella bacteria at the slaughterline and thus diminish the risk of carcass contamination during processing.
On farm level, however, the use of antibiotics as prophylaxis and treatment is forbidden or compromised due to the bacteria’s resistance against many drugs. Especially phage type DT104, which is a very commonly present Salmonella Typhimuriumin pigs, is regarded as being multi-resistant against antibiotics. Hence, the feed additive industry has been developing products with antimicrobial function. Among these, medium-chain glycerides and essential oils are the most promising that have proven consistent efficacy both in vitro and in vivo.
Caproic acid and carvacrol, in vitro

Although medium-chain fatty acids are known to have an effect on bacteria, not all of them, however, have the same effect, as some bacteria are sensitive to specific chain lengths. Caproic acid (C6) for instance has a strong effect on Salmonella. The outcome of Aveve’s in vitro test showed that both the Minimal Inhibitory Concentration (MIC) and Minimal Bacteriocidal Concentration (MBC) were lower than 0.063% for caproic acid at pH 5 and 0.125% at pH 7, see Figure 1. Both caprylic (C8) and capric acid (C10) resulted at pH 7 in at least a double MIC and MBC value of 0.250%. Lauric acid (C12) did not show any bacteriostatic or bacteriocidal effect in this test. The finding that caproic acid is more efficient against Salmonella are in line with data from publications and research.

Aromatic compounds positively influence several physiological processes in the animal. Not all aromatic compounds have the same effect. Carvacrol, the major active component of oregano, is very efficient against both gram-negative and gram-positive bacteria. In the Aveve test MIC and MBC values for carvacrol are much lower than those of medium-chain fatty acids at both pH 5 and pH 7. Due to its high pKa value (10) undissociated carvacrol molecules, the active antimicrobial chemical form, will be present in higher amounts in the gut. They have 2-fold action:

Furthermore, the in vitro trial showed a more pronounced effect of pH on antimicrobial activity, also shown in Figure 1. At pH 5 the MIC and MBC for carvacrol is lower than 0.00063% while at pH 7 the MIC is 0.01% and the MBC is higher than 0.01%. The reason is a stronger Salmonella challenge at pH 7, which is its optimal pH for growth. 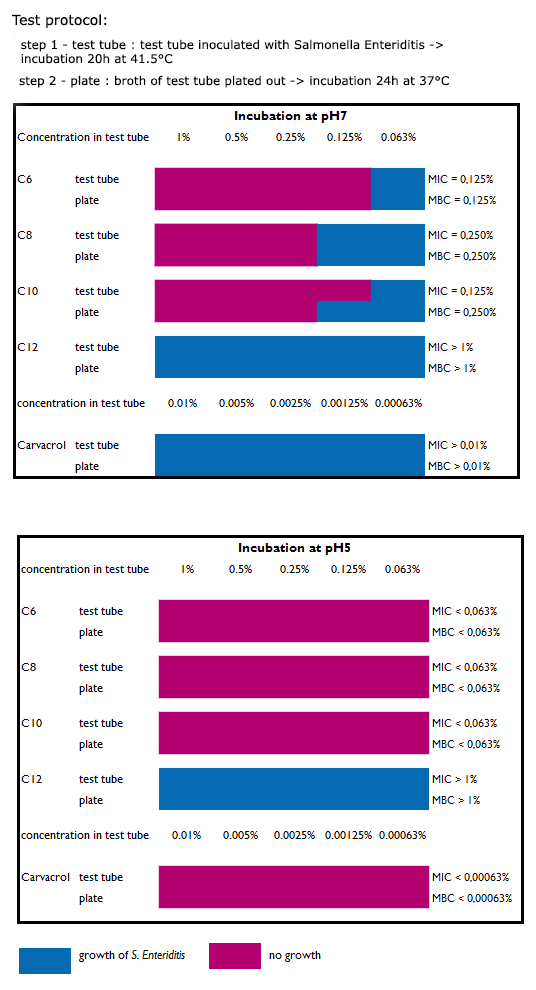 The in vivo trial presented below was part of a two-step project to remediate Salmonella positive herds by means of additives. The researchers first examined if and to which extent the addition of the commercial product AveMix Plus to the diet affects Salmonella Typhimurium shedding. The distribution of Salmonella was also assessed in experimentally infected piglets (seeder model). The product composition strategy used is a combination of a medium-chain glyceride with specific chain length (caproic – C6 and caprylic acid – C8) and selected aromatic compounds of oregano, thyme and chili pepper. Among other effects, both type of components singly have a good antimicrobial effect against Salmonella, as indicated above, while a combination has more effect than the sum of its parts. With respect to the direct anti-microbial activity both type of active components together will have easier access to the cytoplasm by disrupting the cell membrane integrity of pathogenic bacteria.

Different places of interaction, difference in hydrophobicity, molecule size and charge can explain the additional effects. However, the in vivo model is more complicated. It is essential that the investigated dietary supplements are active at the right place in the gastro-intestinal tract. The strategy is specifically designed to survive any feed production process and reach its maximal activity in the small intestine. Therefore, on one hand, medium-chain fatty acids are supplied under an esterified form ensuring their gradual release, and on the other the phytogenic blend is supplied as a vegetable fat matrix encapsulated product.

The experimental design was set up following the seeder model in which on day 6 of the experiment piglets were infected (seeder pigs) with S. Typhimurium MB2486 that were placed with non-infected pigs (challenged pigs) on day 8.

Figure 2 – Effect of AveMix Plus on the presence of S. Typhimurium MB2486 for the challenged piglets of the in-vivo seeder trial:

A similar negative effect was seen on the feed conversion ratio (FCR) which increased from 1.50 to 1.64. The addition of the combination additive to the diet of the infected piglets affected the performance positively up to the level of the non-infected piglets. Total live weight + 24% and FCR – 11% compared to the infected piglets without dietary supplementation.

In the digesta of euthanised piglets at end of the trial period the average count of S. Typhipurium MB2486 in the caecal and ileal digesta was reduced (Figure 2) compared to the PC group. The average count was more reduced in non-infected piglets (challenged piglets) than in the infected piglets (seeder). Furthermore, some interesting reductions were noted in the percentage of positive samples of ileocaecal lymph nodes and tonsils for S. Typhimurium MB2486. Again the reduction was specifically seen in the challenged piglets.

In a second step the feed supplement was tested in practical conditions on seropositive pig farms. The level of Salmonella contamination in the fattening pigs was reduced significantly and conclusively.

Read online
← Selecting the right NSP-enzymes to reduce poultry feed costs Optimal Gut and Survival in AGP-Free Broilers →
We use cookies to make sure that you experience our website as well as possible. If you continue to use this website, we assume you will be pleased. / We gebruiken cookies om er zeker van te zijn dat je onze website zo goed mogelijk beleeft. Als je deze website blijft gebruiken gaan we ervan uit dat je dat goed vindt. / I KNOWNeeRead more